I am a binge eater 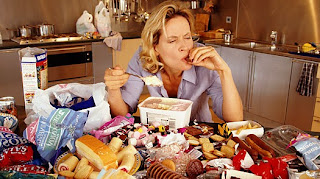 Binge eating is an insidious monster. Years ago, I used to binge eat until my stomach hurt. My stomach would stick out and it would physically ache from the sheer amount of food in it. It's been a long time since I did that. I basically became aware of it and worked on stopping it. I did. It's been over 10 years since I've had a binge like that. I mean a real one, where I kept eating even though I was absolutely full and sick. I really believed I was over that. Then today I realized that while I no longer binge until I am ill and aching, I still binge. It's just that the binges are smaller now, but they are still binges. Last night I went to the store just before dinner and bought a pack of Nutter Butters. After dinner I started eating them and did not stop until I ate the entire package. No matter what you call it, that is a binge. I stopped binging the first time by being aware and talking about it, at least to myself, so that's what I'm going to do this time also. I'm going to face the ugly truth that I am still a binger and now I have to deal with it.

So, for the umpteenth time this summer, I am starting over tomorrow. It begins with Crossfit at 6 am. Then there will be a good paleo breakfast. I will then work for a few hours on school work. In that time I will do a mini WOD every 60-90 minutes. The mini WOD will be 5 minutes of two or three bodyweight moves. This will not only keep me moving but help me to stay away from food. I will drink water until my teeth are floating. I will eat a healthy, paleo lunch and then start working on my presentation for Friday. Also, with some mini WODs thrown in. I will then eat a healthy, paleo dinner and once dinner is over eating will be done for the day. There will be no dessert of any kind for any reason. No sugar. No sugar. No sugar. And, as much as I love fruit, I'm going to cut back some. I think the fruit is setting off my sugar cravings. Weird, I know....but I've been eating mangos a lot lately. I usually eat them after breakfast and then after lunch I want sugar. Coincidence???? I think not. So I'm backing off the fruit a bit.

Also, instead of making some sweeping pronouncements that I will lose 10 lbs in the next two weeks, I'm going to keep it simple. I want to get through tomorrow. That is my goal - success tomorrow. Just one day.
at July 14, 2013