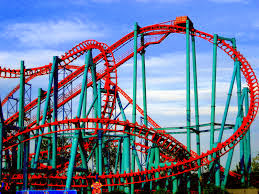 When you start paleo, or any program where you are eating super clean and removing sugar and wheat, you have ups and down in energy levels. This is the part most people can't survive. There are headaches, exhaustion, cravings, and you generally feel like crap. I have been lucky this time and am avoiding most of those things. I have kind of stuck to paleo so the adjustment isn't as huge as it was the first time. I've gotten into the habit of not eating rice or starchy veggies, and I never went back to wheat. I would have it now and then but I never went back to eating it the way I did before. So I think this has helped me have an easier transition. The energy though is like it's on a roller coaster. On Tuesday I felt great. I PR'd my clean and jerk at Crossfit and I killed the WOD. Last night was like a moving through mud. I had no energy and the WOD was insanely killer. Today, eh, kind of bleh..... No Crossfit tonight, it's a rest day. So that's probably a good thing.

I have read some stuff about people bashing Paleo and I don't get it. I just don't get it. They have probably never tried it so, there's that. Also, think about it. Most of the food the average American eats was not consumed by our ancestors. That right there makes it suspect in my book. Our ancestors ate food, not energy bars, or protein drinks, or whatever. They ate food. Real. Honest. Food. That is what the Paleo diet is. Real. Honest. Food. No I don't eat wheat, but I discovered - through Paleo - that wheat is not my friend. So there you go. I have discovered this time that milk is not my friend and that makes me sad. But it is what it is. People can say that things don't bother them, but until you have cleaned your system out of those things - you don't know. It takes 30 days to clean your system out completely of all the crap you've spent years putting in it. So if you try anything for less than 30 days, you really don't have any answers. I never believed that sugar was an issue for me until I kicked the habit. Then I found that sugar is a laxative. I mean seriously. I eat it now and I make a bee-line for the bathroom. Ugh!!!!