Did you get the number of the truck? 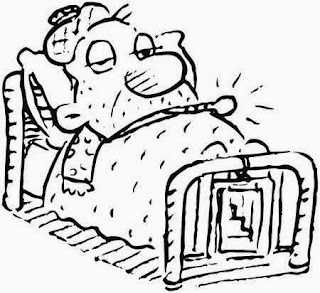 Something hit me yesterday and it hit me hard. I woke up with a little stuffy nose and tiny scratchy throat. Around 11am I started getting tired so I laid down on the couch. At noon Hubby called to see if I wanted to go to lunch when he was done, I said yes, call me and I'll meet him somewhere. By the time he called me I was in bed, shivering like crazy, and feeling like I had been run over. It was miserable. As the day progressed I seemed to get worse and worse. I went to bed at 8pm and took some Nyquil. I was out. I slept really well, which surprised me, and woke up feeling much better. Some breakfast, a nap, a shower, and I felt pretty good. A whole lot better than I did yesterday at this time. I'm sure by tomorrow I'll be just fine. Whatever this was hit me hard and fast. I don't think I've been laid low that quick in a long, long time. I'll be going to bed early tonight and praying that I'm back to myself tomorrow.
at June 15, 2014