Have I become a drama queen? 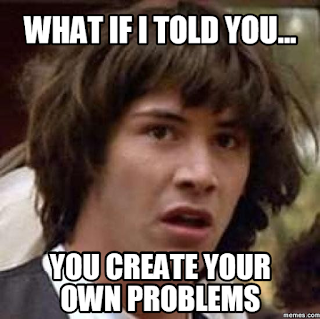 I like to say that I detest drama. The world is full of drama and I hate making more. But now I am wondering if that is just talk. I did have some money issues that were weighing me down, but now those have been straightened out. Which led me to thinking about other things on my 'hit list' and that is where the drama queen thought popped up. I want to lose weight, desperately want to lose some weight. I've given up the thought of being skinny, I just don't want this big belly that I have. Well, that belly is caused by sugar. I can feel it happen when I consume sugar. So I need to stop eating sugar. It's hard, but it's not that hard. But recently, including last night, instead of avoiding it, I eat some and then feel bad, so I eat some more, and then feel worse. Creating my own drama. Then there is the whole writing the dissertation thing. I have to do it, I have to work on it regularly to get it done, our entire future is balanced on this thing. But have I worked on it at all?? NO. Have I made up lies and excuses for it not being done? YES. Creating my own drama. Lastly, grading summer school work. I am getting work in on a daily basis, more than once a day. Yet I put off the grading and put it off and put it off, until I have a stack like I brought home this weekend. Creating my own drama. Time to get off the drama bandwagon. I wouldn't feel so bad if I did something constructive while avoiding this other stuff, but I don't. Yesterday I spent a large part of the day laying on the couch or laying in the pool. That in and of itself would not be bad, if I had nothing to do. But I have lots to do. I could have spent some time in the pool, then did some work, then some time in the pool, then some work, etc. Instead, I spend lots of time in the pool. Got little to no work done, and now I feel guilty and stressed by that.

It is time to stop this nonsense. I am an adult. I have control of my feelings, my actions, and my life. It is time to start acting like that. No more stress and guilt over stupid stuff. Time to step up and act like I know I should. No more putting off things that need to be done. No more instant gratification. NO MORE. It starts today, it starts now. I read an article about how organized people think a little bit differently than unorganized people. Instead of putting things off - HELLO!!!! - they respond with HOW ABOUT NOW? That is going to be my mantra from now on. How about now? I'm going to print it out and post it on my wall above my computer so I see it every time I sit here wasting time. I'm going to put it in my planner and I'm going to say it to myself all the time. How about now?

I need to begin by getting dressed for Crossfit and cleaning this room. I have over an hour before Crossfit, so how about now?

This was at the top of my blog today:
Quote of the Day


Action may not always bring happiness; but there is no happiness without action.
Benjamin Disraeli