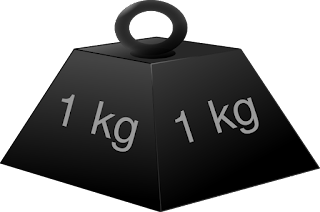 2.2 lbs this week. Woot!!!! I was a little afraid because I really hadn't tracked this week and there was leftover candy, oh plus the malasadas....yeah, I was not expecting a good week at all. But I think, and this is the key, that I have been limiting my portion sizes. I did have candy, but I had 4 tiny snack ones instead of a bunch. I did have malasadas, I had 2 of them, but I was hungry and even after 2 I was not stuffed or uncomfortable. So I think that even though I strayed off the healthy path, I am exercising portion control so it is helping. Yeah. I would however, like to really be strict this week. I'm down a total of 3.4# since I started and if I could lose 1.2# this week I would hit 5#. That would be a huge mental boost. And I could use it.

Towards that end, I went to Costco yesterday without Hubby and had a chance to look around a little. Hubby always gets so antsy and is constantly hounding me to go. So it was nice. He will be working nights all week, so that means no dinners. I know myself well enough to know that I may cook, I mean really cook, dinner a night or two, but that will not last all week. So while I Costco, I looked around for things that were healthy and easy. I got some turkey burgers that are 4 points (I believe) and 35g of protein - yikes. I also got some almond/cranberry/chicken salad in little cups that are like 4 points or so. These will be great for the days I don't have lunch. Just get my salad stuff and grab one of those and I'm ready to go. I can put them in salad or on bread. Quick, easy, boom. I got my regular salad stuff, of course. I also got some oatmeal packets. I had oatmeal a couple of times from Starbucks and I had forgotten how good it is. So I examined all the oatmeal they had and found one that is pretty good. Plus I have eggs, which I love. So I'm set. I will survive this week and stick to the plan.

One of the things that happened when I was on paleo, was that I completely lost the idea of portion control. Seriously. Because you don't count calories or consider portion size, I completely lost that ability. On paleo you basically just eat until you are full. That may be a boatload of meat, but that's what you do. I've completely had to relearn portion sizes and reasonable amounts of food. Now, when I think about this it makes sense. Eating an excessive amount of food, even if it's good food, is going to create fat. I know there are thousands of people who don't count calories and who manage to lose weight, but I think they are not broken. They don't have the twisted relationship with food that I have. They don't use food to feed every emotion in their life. Besides, I don't want to have to eat a certain way the rest of my life. I would much rather be able to eat regular food, just control how much I eat. I'm thinking of when we move and are traveling in the RV. I don't want food to be a big issue. I just want to travel, have fun, eat what I want just less of it. Alright, I know I can justify anything if I want to, but I know how I want to live my life and I want it to be simple.

Time to get moving. All this talk of food has made me hungry. I'm trying to decide if I should eat first or walk first. Think I'll eat, shower, start laundry, then walk and get some stuff written. Okay, I'm off....
at November 08, 2015