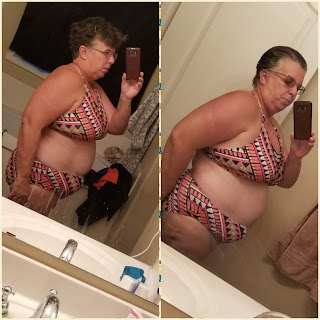 Can't believe I'm even putting this out there, but here it is. I've been on AltShift for 30 days and this is my first progress photo. The right side is when I started and the left side is this morning. I have no idea what I weigh, but I know that my clothes are fitting better. I just see so much improvement in those photos. I'm actually kind of stunned.

So, what am I doing? Well, I'm doing AltShift. This is the longest I have stuck with it and it really does feel amazing. I have not been perfectly following the protocol, but I've been doing much better than ever before. Looking at these pictures makes me want to do it even better now.

I did make a major error this morning and I paid dearly for it. There was a pancake fundraiser for the football team and we went. I made a conscious decision to eat the pancakes even though I haven't really had any wheat or sugar in a month. Well, around noon I started to feel it. I got all shaky and sweaty and felt like crap. I wasn't hungry, but when I started eating I wanted to eat all the food. I didn't but I wanted to. I dozed on the way home and fell asleep in front of the couch. I didn't really want to eat dinner but knew that I should. It's not worth it. I felt so bad for so long, the pancakes were not that good. So, lesson learned and I won't make that mistake again.

I didn't walk much today or yesterday either. I have to fix that tomorrow. I have no excuses other than I was just lazy. So I need to move tomorrow. I think I'll get up and walk outside in the cold and listen to my book. My goal is 10,000 steps tomorrow.

I did purchase a very expensive pair of shoes today. A couple of weeks ago I bought a pair of Naturalizers. They were really comfortable, but they were a little large and a little blah. Today we were getting Hubby some good walking shoes and I found a pair Abeo which are super comfy and cute. Cuter than the Naturalizers anyway. So I'm sending the Naturalizers back and keeping the Abeos. They were unbelievably expensive and after purchase, I felt kind of sick to my stomach. Of course, that was when I was beginning to react to the pancakes so that was probably the problem. I do have to reign in the spending. I seem to be spending like we have a ton of money. And while we are doing fine, there is no reason to spend it all, which is what I'm doing. So these shoes are it for a while. Me and Amazon are parting ways. My goal is to buy nothing this week. We will be going out and will need gas, but that is all. Nothing else. I took us from poverty to homeowners before, I can get us out of this mess. It's not really a mess, I just need to stop spending and focus on savings.