Here it is Thursday 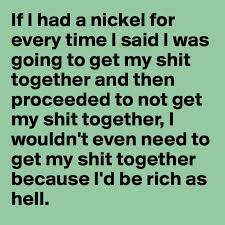 and I do not have my shit together yet. I did well on Monday, though I didn't make 10,000 steps, but on Tuesday it all fell apart.  We had a volleyball game in Parker, AZ which is exactly 156 miles from Phoenix. According to Google maps it takes 2 hours and 30 minutes to get there. Factor in a stop or two along the way and boom, 3 hours later we are arriving at our destination or home depending on which way we are going. Even though I knew about this game all year, I did not plan for it. We had to get on the bus at 12:30 so I did not get my steps in that day. And we were on the bus for 6 hours and I did not plan for food. WTF was I thinking?  Actually, I wasn't thinking. So I ended up eating chicken salad sandwiches - with the bread - which might explain my inability to poop yesterday, as well as candy. Far, far too much candy. Then we did not home until 11 pm and yesterday I had to get up super early to go to the dentist - that was fun and a whole nother story. So I was really tired all day and felt like having beer. So we went to lunch where I had not only beer (lots, more than normal) but burgers with the bun. UGH!!!!  Oh, and let's not forget the milkshake for dessert. So it's no wonder that I felt all backed up - I was. But today is a new day and I have a new attitude and things will be different today.

I do not like the way I feel and I know exactly what to do to feel better. So why not just do it? I can say no to things. No one has forced me to eat candy or milkshakes. I am in control at all times. Time to start using my mindfulness again and get back on track. Starting right now.
at October 11, 2018