Yes, I'm going to whine and moan for a minute. I only have 15 minutes (I'll explain later) so I need to make it good.

I feel like a slug. I feel fat and out of shape and generally yucky!!!  The thing is that I know I can change all that I just need to figure out how to make it work.

Let's talk about self-care really quick. I've got the sleep and the meditation on point. I'm even becoming enamored of the unentertained time. So that's all good. The gym is coming along, though not as quickly as I had hoped it would. It's the steps that are my nemesis right now. I have not gotten 10,000 steps regularly since school ended. So that is what I need to work on. Let's examine it.

It is summer in Phoenix and short of getting up at 3am to walk, walking outside just isn't happening much. I do get up at 4ish to take Mavy on a short walk, but beyond that walking outside just isn't a great idea. I've been trying to pace in my room here for various things. The last couple of days I've been watching some webinars and I've paced while I've done that. But I'm still falling far, far short of 10,000 steps a day. Yesterday, when Hubby was playing golf and I had the opportunity to pace the entire house, I got hardly any steps at all. By the afternoon my back was killing me and I mentally felt like crap. So I have a couple of ideas that I need to flesh out.

First, whenever I sit down here I will set a timer for 10 minutes. No sitting for longer than 10 minutes at a time, even if I'm working on something. I'm seriously considering getting the adjustable desk that Costco sells. The whole surface rises so you can stand. The problem is where would I put it? I just rearranged the entire room and bought a new shelving system. I can't just chuck it for a desk. I could put it by the window or, even better, move this table to the window and put the rising desk here. Then I could do my crafts on this table which was the original plan and give the husband back his little folding table. Hmmmm...that desk is rather expensive, $250 I think, but I could swing it. And if it would save my back and help me get my steps it just might be worth it. Have to broach the subject carefully with the husband.

And pacing. I have to keep moving as much as possible. Need to go shower, finish this later.

Never finished this the other day, it is now Monday 6/28, but I did get the desk. Hubby was fine with it because I've been talking about it for months. I mean. look at this thing. It rises really high and then lowers so I can sit at it. It is amazing. We picked it up on Thursday and I've been using it since then. I'm on my feet a whole lot more and definitely not sitting as much, but I'm still not getting my 10,000 steps a day. I think it's because my step counter (Samsung watch) doesn't necessarily count some pacing that I do. It doesn't. I just paced my room 10 times with my phone in my hand and the steps didn't change. So I need to consider that when I consider how many steps I've taken. Good to know. Anyway, I love this desk, it's freaking awesome. 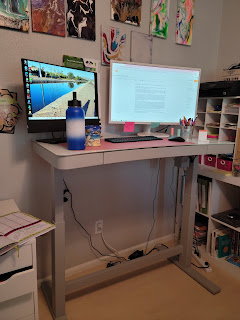