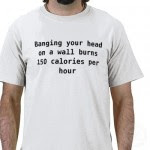 I sometimes wonder about myself. Seriously. I'm reasonably intelligent. Fairly articulate. Relatively intuitive. And yet sometimes I'm a complete moron.

Three weeks ago I had these grandiose plans of working out twice a day; tracking every little thing I ate; creating huge calorie deficits and losing vast amounts of weight. Then life hit. I worked out and hurt my back. Then I got rolling on my thesis which distracted me from working out. Then I was getting tired from working late. Then I just got lazy.

Here's the deal, I'm pissed off and angry with myself for not doing the things I want to do. I want to run. I see people out jogging when I'm walking the dogs and I think "that's what I want to do." So why am I not doing it? A couple of reasons - none of them great. First, my weight. I'm too heavy at this point to try and run, everything hurts. (Please note that I started running when I weighed over 200 lbs so this really is a lame excuse). Second, I need new shoes. Now this one is legit. The shoes I have are pretty worn out and I wear them to work, but we really didn't have money for me to buy new. I think I can afford a new pair this week. Third, I am just freaking lazy.

I believe in the power of positive self talk but I also think there are times when you need a good swift kick in the ass. So this is me trying to kick myself. For the past week I have been lazy and using excuses to not work out and to eat lots and lots of crap. So the excuses stop right here and now. I am going to work out this morning and I am going to eat right all day and I am going to track everything. No crap, no excuses, no bullshit. Just one freaking day........

Update #2: Decided to tackle things head on. Did Couch to 5k Week 1, Day 1. My left heel hurt, I was getting shooting pains in my right knee, I've been having low back pain for a week now, and I generally felt like crap. But I did it. Not only did I do it, but I started the program on my phone and it wasn't working right so I started the whole damn thing over again. A 30 minute walk/run turned out to be 56 minutes - yeah me!!! Then I came home and made a 2-egg omelet loaded with veggies and had a banana. I also realized that it's not necessarily the workout that helps me, but the fact that it makes me want to eat better. A definite plus.
at June 24, 2011