Not the day I planned

I had planned to hike early this morning, then go and see the new Star Trek in Imax. Then take the fosters to the dog park for a while and get the boy a harness to see if that would stop his pulling. All of that got cancelled when we woke to find Rocco all swollen. His neck, lower jaw and front limbs were all swollen from his lymphoma. We quickly realized this was the end for him. We made an appointment at the vet's and spent the morning with him. Around 1 I left for the vet and he's gone. It's hard to lose a pet. It's hard to lose 2 in 5 weeks. It was really, really hard to leave Rocco. We are having him cremated and getting the ashes back, but for some reason I could not leave him. It was like this giant ending. Him and the other dogs that have passed in the last few years have been a major part of our lives for 18 years. It's like a chapter in my life is ending and I don't want it to. Wow, talk about sad. Anyway, I have to go on because I have other animals and fosters and things to do, I'll just be profoundly sad for a while. 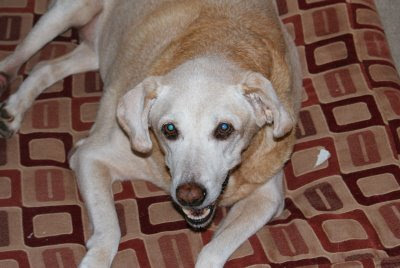 Very sad... but try to think he is in better place now maybe...

I'm sorry to hear this...but at the same time..I think that this would be better for Rocco...finally, he can rest..I also share the same feeling with you whenever one of my pets passed away.

I am so sorry. It's very difficult for you, and it will need more strength to keep up with your health and fitness. Take care.

Oh Flo, am sorry for the loss. I can understand. Cried a lot too when we lost our pet dog through a vehicular accident. At least let us just think that Rocco is now free from pain.

Have a nice week!

My sincerest condolences on the loss of Rocco. He looks like he was a wonderful dog.

Oh, Flo. How terrible. Big hugs for you from Florida.

Sorry for your loss. That's too bad. It is hard to loose a pet.

I am so sorry for your loss. It is so difficult... a pet is most definitely part of the family. Again, I'm very sorry. I know that Rocco is off frolicking with my Bandit. You'll be in my thoughts!

I'm so sorry about Rocco. I know it's hard to lose a pet.

I was just in your situation last month. I lost my dog on Good Friday, and it was a very painful experience. I also had him cremated and put outside near where he used to sleep. So here I am offering my condolence to you. But like everyone's been telling me, Rocco's up in heaven now, where he no longer suffers.