My line in the sand 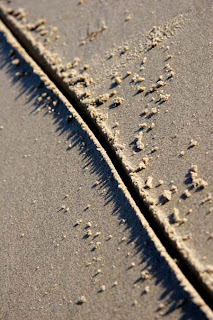 In the last week or so we've been working on getting a house. We put in an offer, they countered, we countered back, they countered again and yesterday we submitted the final counter. We are going to buy a house. Absolutely. During this process though I realized something. There were points where we had to get creative to get things we needed and in the next two months things are going to be tight, really tight. We need all our available cash to go to the house. There were points where it looked like we faced insurmountable odds, at least in my eyes, and I just wanted to give up. This kind of surprised me as I don't view myself as a quitter. I'm also not the type of person to fight a losing battle, but I don't think I'm a quitter. So when I had the urge to quit I was a bit surprised. Luckily my husband, my Realtor, and my loan officer wouldn't let me. In fact I think that the Realtor and loan officer have completely taken over the project and I just sign my name, but that's another story.

I wondered why I wanted to quit so easy. This is the perfect house for us. It's small, needs a little work, has a big lot, and it's cheap. That's exactly what we wanted. Why wasn't I willing to fight for it? Then I realized what was going on. This is an area I'm not familiar with and I didn't know how to fight. I didn't know how far we could push the issue. I didn't know where the boundaries were. I don't completely know the rules of the game. Once I realized this I gave myself a break and considered that I may not exactly be a quitter but I didn't know how far to fight.

Thinking about this got me thinking about my weight loss and working out. The last few months I've allowed all kinds of things to get my way and I've been accepting all sorts of excuses. I'm tired. It's late. It's early. I'm busy. These are all incredibly lame. As a result of not sticking to my workouts, I'm not handling stress well. Yesterday when I realized we are going to buy this house, I got incredibly nauseous and developed a raging headache. I wanted to crawl into my bed in a little ball and hide. It was terrible. Well, I'm done. This is my line in the sand. I know this battle. I know how far I can push it. I know when to push and when to back off. I know the boundaries and I know the rules. There is no reason on God's green earth I can't fight this battle now. I know it so well I can fight it and the house battle at the same time. I'm willing to fight until I have a dark circle under my eye from a knockout blow.

So today the battle begins. I'm tired of feeling this way and I'm the only one who can change it. So draw your weapons and prepare to fight.
at December 06, 2009