Pain is fear leaving the body 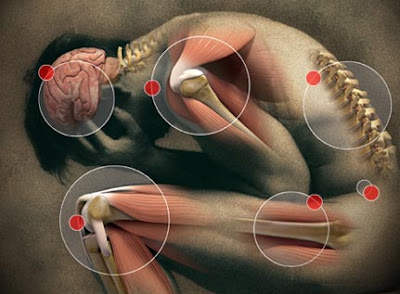 I am really coming around to believe that saying is true. Two weeks ago I started riding my bike to work and pain has been my constant friend. It began with the feet, they hurt a lot. And I couldn't figure it out since I was riding. But they hurt. Also my butt. You can not believe how much my butt hurt the first week. Yikes. Every time I sat on the seat pain shot through my butt bones. It felt like electric currents were running through my butt. Like it was hooked up to pennsylvania electricity company. Thankfully that passed. Then we moved on to the knees. My bad knee hurt and gave out a couple times, it was pretty miserable. Then we moved into the back. Yikes!! Now we are on the shoulder. It hurts a lot. I even considered going to the docs until I thought about the pain I've gone through in the past 2 weeks. Each one hurt so bad I really did think something serious was wrong. But a day or so later I had forgotten about it. So I'm giving the shoulder a day or so. Yesterday was the first day it hurt, and today is better so I'll wait until Friday. If it still hurts on Friday I will call the doc. But truthfully, the mental anguish I've been struggling through is probably a large part of the problem. Every time a pain gets bad I think maybe I can't ride my bike. Ummm hmmmmm, yes, definitely fear leaving the body.
at February 15, 2012