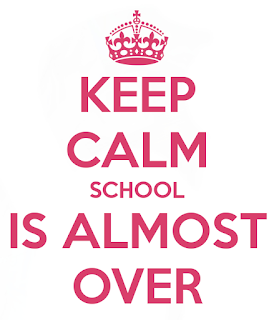 The last day of instruction was Friday. Just 3 more days of testing and we are done. My proctoring schedule is awesome so I'm looking forward to these next 3 days.

Today is graduation. I have to be at Blaisdell by 10:30. I've been sick for the last couple of days. Yesterday I never even took a shower. I binge watched Sons of Anarchy - what a disappointing ending - and laid on the couch most of the day. It was good, something I needed. Friday I was sick too, but being as it was the last day of school, I forced myself to go in. I had to say goodbye to the kids. I'll see them for finals, but not in class again.

I have not worked out all week. Last weekend I decided to run during a WOD. Well, I paid for that. My plantar/leg/hip has been bothering me all week because of that. It was getting better on Tuesday when we had an evacuation drill at school and I had to walk a few blocks in my sandals. UGH!! Major setback. Then I got sick. Yeah, it's been an awesome last week of school, but I have survived and things will get better.

That is about all. Our neighbors have been on vacation and it has been awesome not having them around. I wish they would move.

That's really all. I have to work on getting in the shower and getting ready for graduation. I probably should eat. Maybe I'll just go to Starbucks. I don't know. When I get sick, I don't get hungry.
at May 24, 2015