Working out and Crossfit 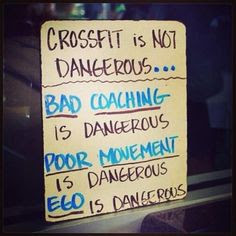 I've been doing Crossfit for almost 3 years now. That is longer than I have ever stuck with one particular program. But lately, I'm thinking that Crossfit and I have reached an end. There is a lot going on in my life, at the Crossfit gym I go to, and just in general. I think it might be time to step away from the box.

For much of the 3 years I have been at Crossfit, I have had some sort of injury. My shoulder, knee, back, foot, not to mention all the little pains and strains that I get. I don't blame Crossfit or our coaches. I blame myself. Crossfit is set up to make you want to try and push yourself. I am very competitive with myself and I fall into that trap all the time. I can snatch 45#, let's see if I can do 50# or 60#. I know it's stupid, I know better, but I can't help it. When I do the sensible thing, and hold back, I just feel like a slacker.

So for the past 7 weeks I've been dealing with this foot injury. I have seen the chiropractor and been pretty good about rolling and resting it. I've also been really, really careful about Crossfit. No jumping or pounding of any kind. No running, broadjumps, jump rope, box jumps, etc. Nothing. So last week it felt really good. REALLY GOOD. When I saw the chiropractor on Thursday, we agreed that I should wait 2 weeks before coming back since I was doing so good. In the last week I have probably spent more time out of pain than in pain. I was very pleased with my progress and looking forward to increasing my activity levels.

This morning I head out to Crossfit, since I haven't been there all week, and am feeling pretty darn good. The warm up included running, but I said no way and rowed. The warm up also included jump rope. I thought I would try it just to see how it felt. One jump. One freaking jump, and I was in screaming agony. My foot hurt like it did when it first happened. I wanted to cry. I stopped and immediately started rolling it out. I stretched and rolled and rolled and stretched. It hurt bad. I decided to give the WOD a go because it really didn't involve any jumping, only cleans and jerks. But just doing the cleans and jerks hurt my foot. I decided not to do the WOD and left. I am so pissed off at myself for even trying to jump rope, what the hell was I thinking????? And I'm pissed because I'm tired of this freaking injury. I'm really think I'm just getting tired of Crossfit.

For a couple of weeks now, the thought of quitting Crossfit has been rolling around in my head. I am completely tired of being in pain most of the time. I don't go as much as I should. I'm kind of bored with it. After 3 years the thrill is gone. Also, and no small matter at all, I'm at the heaviest I've been in about 20 years. This is freaking ridiculous. I cannot 'blame' Crossfit because I've gained weight, but it is a factor. I really want to lose weight and I know I need to add in more cardio. I don't know......... I'm really down right now and probably should not be making any major decisions.......

Later that same day: Well, I have indulged in one giant pity party all day long. I have been angry for being so stupid about my foot. I've been angry and frustrated because it hurts to walk and it is all my own stupidity. I have been eating out of control and napping on the couch. A giant ass pity party. I'm over it.I'm over the pity party, I'm over the foot, I'm over everything. I am so freaking frustrated and that could really derail me. I'm not going to let that happen. I am almost 100% sure I'm going to quit Crossfit, but as for everything else, it is up in the air. Okay, I'm feeling stronger and not so much a victim now. I'm going to take it easy the rest of the night, get a good nights sleep and reexamine things in the morning.
at July 04, 2015