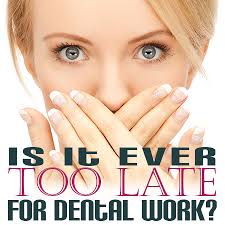 I have horrible teeth. I have always had horrible. I've had peridontal disease for probably 40 years.  I also have an overbite, a huge one. And my teeth don't sit right so my bite in the back is all off. Most of my teeth have fillings in them. And I grind my teeth and a bunch of them are cracked. About 10 years ago I had laser surgery on my upper teeth. My left front tooth and the one next to it have a huge hole in between them. That hole has been there for years, probably 20. I have pictures of me in my 20s and that area of my gum is purple, indicating that gum disease is already active. So yeah, the hole between those 2 teeth have gone into the bone. Yes, sounds awesome I know. In the last 5 or 6 years, another problem has developed between my front lower teeth.

About 3 months ago, my front teeth were really bothering me. They felt like they were coming loose and they were bleeding constantly, plus there was pain - all the time. I finally reached a point where I was done. I made an appointment with a dentist and went with the sole purpose of getting rid of these 2 teeth. I wanted them out. I was bound and determined that no dentist was going to talk me out of having these teeth removed. So I went to the dentist and he was good with removing them. But he wanted me to go see a periodontist because he thought I should have implants and not dentures. Okay, fair enough. Went to the periodontist. She was great an after looking over my teeth, thought that maybe braces might help. The problem areas were in areas where my teeth don't meet up top and bottom. So they are not getting the pressure that they need to build bone and such. So she wanted me to go see an orthodontist see about braces.  But first I had to have a root planning which was being done by my dentist. So I had the root planing of my entire mouth in 2 sessions - that was fun. Then I went back to see both the dentist and the periodontist. Both were pretty happy with the result but the periodontist wanted to do laser surgery on the top teeth and see wanted me to see an orthodontist. So off I went to the orthodontist.... That was an interesting visit. Not only did I never actually see the orthodontist, they had an entire wall covered in candy dispensers and they were giving ice cream to kids who had gotten braces put on. Anyway, I digress. The lady I spoke to talked about what kind of braces I wanted and how they would have to remove some back teeth but not the front teeth. It was rather annoying. I went there with a specific issue that needed the attention of an orthodontist and I never got to speak to one. So they said the doctor would call the periodontist and figure out what needed to be done. That was the beginning of January. Fast forward to yesterday when I had my appointment for the laser surgery. It was miserable. They lasered the gums. Scraped the crap out of my teeth. I was numb but there was a lot of pressure and pushing and ugh!!!! When the lidocaine started wearing off, I could feel the gums/teeth throbbing. It was bad. Also, my gums look all burnt and pulled back. It's kind of gross. I have to eat soft food for 2 weeks and I can't brush my teeth during that time. It is ugly.

So not only did I not get my teeth pulled. I let yet another dentist talk me into work on my teeth that I don't necessarily want. Why do I do that? I guess it's because I like to think that they are the professionals and know what they are doing. And I guess, even if they want the teeth pulled, having the area up in there clean is better than leaving bacteria up there. So in 2 weeks, I have to go see the orthodontist and the periodontist to figure out the next step.

So that brings us up to date in the saga of my teeth. I am torn between wanting them gong, just gone, and wanting to be able to fix them. It's a hard place to be. And I can't help but wonder if I'm too old to be doing this. Seriously. I'm 60 years old in April and I'm just getting braces???  Of course, this is the first time any dentist has brought this up. I've been to at least 2 orthodontists in my life and never have they told me that braces would fix my problem areas. Never!!! So it's kind of exciting to think they could finally be fixed.
at February 02, 2019