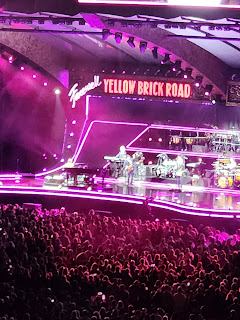 What a freaking show. Last night was night one of Sir Elton's farewell tour in Phoenix. It was truly amazing. He is such a performer and puts on an outstanding show. He sang all his hits, well most of them. There are a couple that I love that are not hits. There were lights and videos and it was really and truly awesome. I am so glad we went. My ears will take days to recover. But it was worth it. I honestly don't remember how many times I have seen him in concert. I can remember one but there are others floating around in my head too. My concert going days were a bit of a blur because of the drugs and alcohol that I used to do. Also, honestly, it was over 40 years ago. But this was absolutely worth every penny to see. I love Elton John, always have and always will. 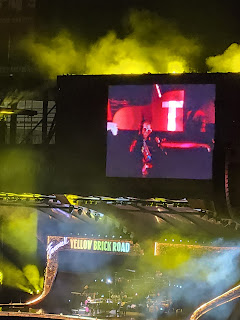 This was the last song - Goodbye Yellow Brick Road - and all the smoke was yellow. He came out for this set wearing a robe - not unusual for Elton - but at the end of the song he took the robe off and he had a baseball type jacket on with Elton John written across the back. He waved to the audience and threw kisses and did all that stuff. Then he turned around and walked off stage and as he did a video played on the big screen of him walking down a yellow brick road in that jacket. It was really touching. I enjoyed it so, so much. And knowing this is probably the last concert makes it even more special. Concerts are definitely not my thing and there won't be a whole lot more in my future.

So we had a great time and really planned it well. I bought some parking in the Footprint Center in advance so we didn't have to screw around with parking. We left here around 6pm and got downtown around 6:30pm. We parked without any problems and walked over to Chase Field. Got into the venue and then had about an hour to spare. C found a place to have a beer ($17) and I headed off to the merch table to buy some souvenirs. After about 20 minutes in line, I finally got a shirt and a hoodie. It was amazing expensive and overpriced but hey, it's Sir Elton. When I got back to C we had a few minutes to kill at the bar before we made our way to our seats. It was packed - to be expected - but a great show. After we got out fairly quickly and figured out how to get back to our car - neither of us really know downtown so that was fun. We got to our car about 11pm. We noticed the line of cars exiting wasn't moving so we just sat and waited. 10 minutes went by and nothing moved. 20 minutes went by and nothing moved. 30 minutes went by and nothing moved. Finally, after 50 minutes, people started getting really pissed off. C got out of the car to look over the edge to see if the streets were blocked - they weren't. Then I got out with the idea that I was going to walk down and see what the heck the problem was. Well, as I got out cars started turning around and going down the up ramp. So C and I quickly jumped back in the car, got turned around, and finally - 1 hour after we got to the garage - got out of the parking structure. It then took another half hour to get home, so it was 12:30 am when we got home. We were tired so it was straight to bed. What an adventure. 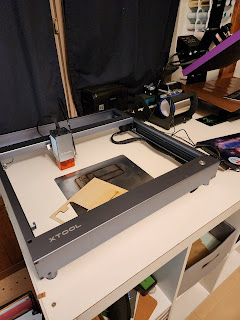