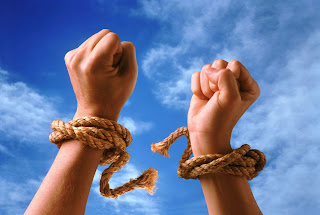 There is something so very freeing about admitting something is wrong and dealing with it. I have a tendency to not deal with things. I was going to say I don't ignore them, but I do. I ignore the problem, pretend it's not there, and hope it will go away. It rarely does until I deal with it, but whatever. So after I got over my pity party last week, I realized I just had to deal with the fact that my knee and shoulder are screwed up. So I have been very realistic. No running, little jumping, being careful with both. And my WODs have been phenomenal!!!! I do what I can, but push myself hard within my limits. Before, while trying to ignore there was a problem, I kept setting myself up for failure. I would try to go too heavy and not be able to do it, then I would get frustrated and angry. Now, I have a much better attitude towards it. I know my limitations and work within them. Todays WOD included running. Since that is out of the question for me, I rowed. It also involved double unders. Those really hurt my knee. In fact, to many single unders cause pain. In the WOD, if you can't do double unders you are supposed to do three times as many single unders. I didn't do that. I did single unders, but the double under number. I'm not stupid. Plus, that's what I can do right now. We modify every other move, why can't I modify single unders? So I worked my ass off today. I feel awesome and am incredibly proud of myself. It is going to be an awesome year!!!!